We believe that the poor reputation of high yield bonds is undeserved. As we’ll see, on Wall Street, it often pays to take the road less traveled, and act in a way that’s contrary to what the majority is doing.

First a note about the data we used in this comparison. Rather than using theoretical index returns that do not account for fund expenses, we decided as much as possible to use actual mutual fund and ETF data, in order to more accurately represent a real investor’s return.

Starting with mutual fund data going back to 1962, we created an equal-weighted index of all current and defunct mutual funds classified as High-Yield bond funds. There are currently 711 funds in this index. Mutual funds and ETFs are the most common way for investors to to participate in the high yield bond market, so we believe that this index is a fair representation of the potential returns from this asset class, net of fund management fees [1].

For U.S. stocks, we started with all available returns (including dividends) for the most common S&P 500 index fund, the SPDR S&P 500 ETF (SPY). This ETF strated trading in 1993, so in order to allow for a longer and more meaningful comparison, we extended the data back to 1962 using the "friction-free" S&P 500 Total Return index.

Now we can take a look at how investing in U.S. stocks has compared to high yield bond investing: 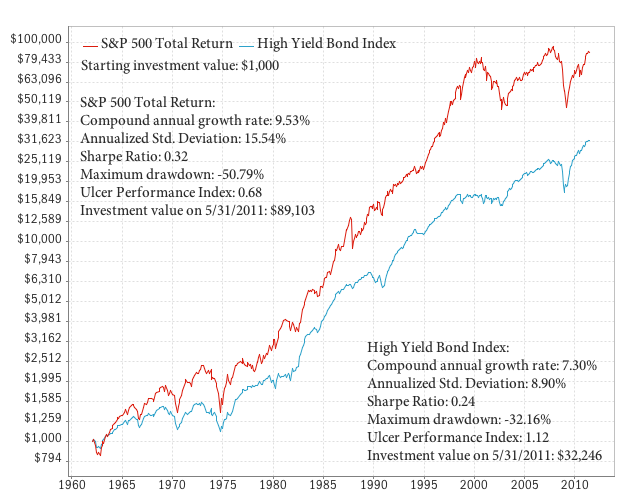 These two markets are highly correlated: peaks and valleys in U.S. stocks often correspond to similar swings in high yield bonds. Notable similarities can be seen during the bear markets in the 1960s and 70s, early 2000s, and the most recent financial meltdown in 2008-2009. This correlation (i.e. lack of diversification) is often cited by financial advisors as one reason to not invest in high yield bonds.

Not surprisingly, U.S. stocks have outpaced junk bonds since the early 1960s. Still, high yield bonds compounded at a very respectable 7.30% during this period, largely because of their high interest rates and bond yields. What’s not obvious is that the risk of investing in U.S. stocks has been disproportionately higher. According to this data, high yield bonds are actually safer investments than U.S. stocks. We’ll look at two measures:

The Maximum Drawdown for U.S. stocks over this period was -50.79%. That means that a stock owner would have lost more than 50% of their portfolio value from peak to bottom (in 2008-2009). For high yield bonds, this number was much lower: -32.16%. Also, as you can see in the chart above, U.S. stocks are significantly more volatile, with a Standard Deviation of 15.54%, versus 8.90% for high yield bonds. One clear example is the stock market crash of 1987: notice on the chart that high yield bonds barely flinched while stocks took a tumble.

More importantly, we’ll take a look at a performance metric that compares compound annual return to periodic investment drawdowns: the Ulcer Performance Index (UPI). (For a full explanation of UPI, see this Wikipedia page). Aptly named, the UPI is a great measure of risk-adjusted returns. A higher UPI means fewer "ulcers" or worries about your investment as it cycles through inevitable periodic declines. The UPI for high yield bonds is 1.12, compared to 0.68 for U.S. stocks. In other words, since 1962, on a risk-adjusted basis, high yield bonds have been much safer investments than U.S. stocks.

And that, in a nutshell, is why we like junk! 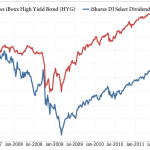 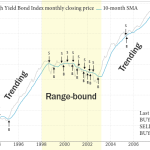 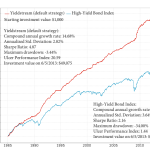